Try it:
You are here: Home / Tag Archives: Srebrenica 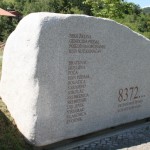 In may 2011 Ratko Mladic was arrested. As the main culprit he is accused of the massacre of Srebrenica. Under his command 8,000 Muslim men and boys aged 12 to 77 years were brutally murdered. This was the sad climax of the “ethnic cleansing” of Bosnia by the Serbs. This is also a symbol and a fact that minorities in ... END_OF_DOCUMENT_TOKEN_TO_BE_REPLACED